In Bangkok, transportation is key. The city is very spread out and surprising discoveries can be made anywhere. No clear city centre was ever defined. And no logical, urbanized street plan was ever made. The Bangkok Transportation System (better known as the BTS SkyTrain can help, with its air-conditioned (joy!) trains zooming above the city hustle on two lines. The MRT subway system also helps, but only boasts one line that covers very little of what Bangkok has to offer. So what is one to do to get around the rest of the city? 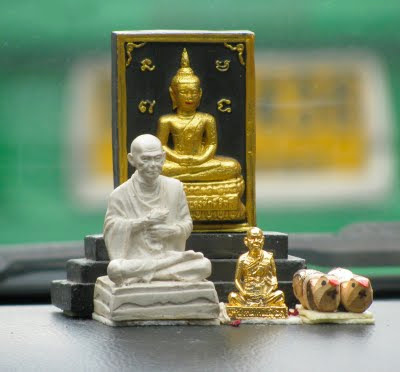 If you’re well-timed and can deal with the traffic flux, taxis are a surprisingly good option. Definitely more affordable than taxis in the Western part of the world, it becomes the transportation of choice to get to certain parts of the city. In a clean, non-polluted, air-conditioned environment, that is.
Well-established Bangkokians like Dale Konstanz quickly became addicted to taxi rides. And there is nothing better when stuck in a traffic jam than examining the beautiful, quirky and colourful items cab drivers proudly display on their dashboard. In fact, he started a blog about it called Still Life in Moving Vehicles and even published a photography book titled Thai Taxi Talismans with River Books. 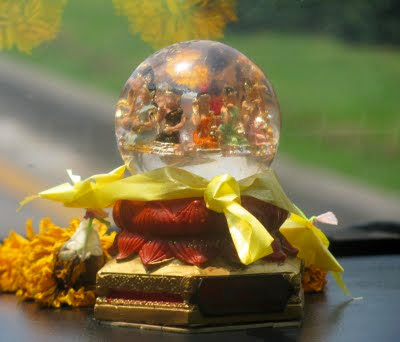 Having myself had plenty of opportunities to observe the phenomenon first-hand, I am so happy to have found such an interesting and extensive catalogue of Thai cabbie good-luck charms. From Buddhas, to coins and banknotes Thai and foreign, from toys, to flowers, to amulets...