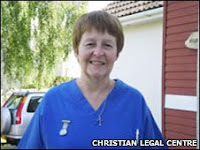 As one might expect in victimization game truth does not matter that much. The wearing of necklaces (religious or not), earrings (religious or not), scarves, ties and other items of clothing can pose various hazards to health professionals and patients too. Strangulation is only one of the risks from necklaces, scarves and ties. I have survived two attempts to strangle me. One attempt was by a patient who thought I was a male Spanish inquisitor and the other by a man who thought he was Bob Dylan (he was not). Both attacks were completely unexpected. If I wore a necklace or a scarf at the time, I would not have lasted very long. One can defend oneself from the stranglers hands around the neck, but not that easily from strangulation by necklace or scarf. I observe that NHS is once again attacked by a Christian lawyer. There are many Christians working in NHS who understand why the Health and Safety rules apply to all the staff and who are compliant with the policies.

The only way forward for UK is to accept the new laws for a secular state and true equality for all. In secular state more lawyers could accept, perhaps, that we live on planet Earth, and are entitled to a private fantasy world in our own mind.

Boundaries and limitations are problematic area for those prone to be victimized as well as those doing the victimization.
Posted by bari at 11:07 AM