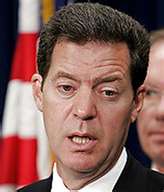 Someone recently hacked into my Yahoo account and sent messages to my peeps pretending to be me. I would like to apologize to all the folks on my e-mail list for that. Hopefully the problem has been corrected.

I have a lot of haters, but I am not going to blame it on one of them just yet. Hackers will be hackers.

Anyway, social media can be a wonderful thing. We tweet;we blog;we Facebook; and it's all good.

Unfortunately, it seems that some folks are a little overly sensitive when it comes to being tweeted on. It's almost Christmas so I guess it's time for the Grinch to appear.

"The governor of Kansas faced an online trashing Friday for tattling on a teenaged girl who sent out a critical tweet during a visit to the state capitol.
Emma Sullivan, 18, was hauled into her principal's office and ordered to write letters of apology after one of Governor Sam Brownback's office contacted the tour organizer to complain about the offending note on the social networking site Twitter.
"Just made mean comments at gov brownback and told him he sucked, in person #heblowsalot," Sullivan wrote, despite not saying anything to Brownback during the visit -- she said she wrote it to get a laugh out of her friends.
The principal "laid into me about how this was unacceptable and an embarrassment," Sullivan later told the Wichita Eagle.
"He said I had created this huge controversy and everyone was up in arms about it... and now he had to do damage control."
Sullivan had just 60 followers on Twitter when she wrote the offending note Monday. Two days later her story hit the local news ahead of the generally slow Thanksgiving holiday weekend.

By Friday morning, she was on CNN discussing the issue of censorship and free speech.

A lively discussion filled a dedicated Facebook page. Nearly 1,300 new people signed up to follow her Twitter feed, which until that point had been primarily devoted to her thoughts on the Twilight series and other typical teen musings.
"I'm mainly shocked that they would even see that tweet and be concerned about me," Sullivan -- who did not immediately return a request for comment -- told the paper Wednesday.
"I just honestly feel they're making a lot bigger deal out of it than it actually was."
Brownback's office regularly monitors social media for references to the Republican governor to see what his constituents are saying about him, spokeswoman Sherriene Jones-Sontag told the Eagle.
His secretary forwarded a copy of the tweet to organizers of the school-sponsored event "so that they were aware what their students were saying in regards to the governor's appearance," she said.

"We just felt it was appropriate for the organizers to be aware... because of what was said in the tweet."
Brownback's office did not immediately return a request for comment Friday." [Story]
Republicans sure are a bunch of sensitive folks. You would think that the governor of Kansas has better things to do than to snitch on an 18 year old for speaking her mind about him.

Finally, I still can't get over my man Andrew Sullivan.

I have an open challenge to him over on the aforementioned twitter. Whenever he is ready to take up my challenge, he can pick a spot in D.C.  (I will pay for it), ride that bicycle of his over, and then we can get it on Jeopardy style.

We could charge a small fee for admission and the winner gets to give the proceeds to his favorite charity.

He will have a chance to prove the Bell Curve, and I will get a chance to show the world that he is full of s*&t.
Posted by bari at 4:11 PM