Things I like very much in this stage play include:

1.The Stockholm Syndrome story, which is about a man who kidnaps a famous male singer in order to get revenge on the elder brother of the singer, but the captor and the captive fall in love with each other. It's like a gay version of Pisarn Akaraseranee's films, because there's some sadomasochistic pleasure involved in the love between them.

This story is very romantic for me and fulfills my sexual fantasy. In this way, it satisfies me like FORGET ME NOT (2010, Naphat Chaithiangthum, 30 min, A+++++++++++++++), which is one of my most favorite films I have seen this year. FORGET ME NOT is about the love between two boys in a rural Thai setting, and the story happens 70-80 years ago. It's like a gay version of Cherd Songsri's films.
http://www.youtube.com/watch?v=xf9YXI3fJcI

Both FORGET ME NOT and I LOVE SYNDROME use some old formulas of heterosexual stories/forms/styles and adapt them for gay stories. And I find both of them very fulfilling and satisfying.

Will this become a trend for Thai gay films and Thai gay stage plays? I don't know, but I think it will be interesting if it becomes a new trend. In the past, there have been many gay experimental films, gay films about AIDS, and gay films about unequal rights or prejudices. Recently, there have been some Thai gay TV series about real gay lifestyles, such as LOVE AUDITION, which is a very good trend, though I haven't had time to watch them yet. And now gay films/gay stage plays which use old formulas of heterosexual stories are made. It is very satisfying to see that some genres of films which have been dominated by heterosexual stories in the past are now being adapted for gay stories. And there are still many genres for Thai gay films to explore, including the folklore genre, the martial-arts genre, the rural action genre, the melodrama about love-between-different-classes genre, the conscript (ทหารเกณฑ์) genre, etc. I hope to see more Thai gay films made along these genres in the near future.

Example from the folklore genre
http://www.youtube.com/watch?v=Vx3a1rqNdlg

2. The fact that the Asperger Syndrome story does not have a happy ending. However, I think its ending is still a little bit too forced. In the ending of this story, which is also the ending of the play, the heroine accepts the fact that she cannot cope with her Asperger boyfriend any more, and decides to dump him no matter how pitiful or innocent he is. Later, when she reads a book about a neglected cat, it reminds her of him, and she feels very sad and wants to cry.

I like it very much that the heroine decides to dump her boyfriend, because I might do the same as her. Both the heroine and I are not virtuous or strong persons. We are just flawed human beings who are selfish, unable to solve every problem in life in a graceful manner, and we just want to survive. However, the ending scene is not successful in making the audience cry, and I think it is partly because the play doesn't spend enough time on this couple. We don't truly understand how much love the heroine might have for her boyfriend or how wonderful her boyfriend can be when they are together. It is understandable that the play contains four stories, so we cannot spend enough time on the Asperger couples. But this fact makes me able to sympathize only with the heroine's frustration with her boyfriend, but I cannot sympathize with the heroine's love for her boyfriend or her regret for having lost her boyfriend. I think this problem can solved if the story is adapted into a 60-90 minute play/film.

3.The play indirectly teaches the audience "not to trust the rumor or appearance", especially in the Stockholm Syndrome story and the Bipolar story. I like it very much that in the Stockholm Syndrome story, the rich elder brother seems like a wicked, crooked businessman at first, and the kidnapper seems like a Robin Hood or a victim who tries to get revenge. But later it turns out that the rich businessman is not as crooked as what we has assumed, and the kidnapper is the crooked one.

The Bipolar story is very interesting if you analyze it politically. But I won't analyze its politics because I know very little about politics. But I like it very much that this story about a superheroine who tries to fight a gang of bad men under an evil mafia (or politician?) is very complicated. Everything is not what it looks like. The superheroine may be a "false personality" of a girl. This false personality may be created by a person who secretly controls the girl and who may gain some profits for himself if the girl destroys the mafia. In this story, the son may betray the father, the follower may betray the leader, and the girl may betray herself.

In a way, I think this Bipolar story is at least as complicated as SHATTERED IMAGE (1998, Raul Ruiz). If this story is adapted into a feature film, its story and its political implications may be more interesting than RED EAGLE (2010, Wisit Sasanatieng, A+/A) and HEADSHOT (2011, Pen-ek Ratanaruang, A+).


4. The structure of the play. The play tells 4 four stories, each one of which has roughly three acts. What is amazing is that the play doesn't tell one story from start to finish before it starts to tell another one. But the play tells act one from each four stories, then tells act two from each four stories, then tells acts three from each four stories or something like that. But I LOVE SYNDROME is very easy to follow, and in fact, it can be considered one of the easiest plays to follow among Ninart's plays. Ninart is great in writing highly complicated stories with obscure messages. I LOVE SYNDROME has a complicated structure, but at least its message is clear (the play wants us to understand people who suffer from each of the four mental syndromes), so that's why I think I LOVE SYNDROME is one of the easiest plays to understand among Ninart's works.

5.Though I like the story of the Stockholm Syndrome the most, I think the performers in I LOVE SYNDROME are most successful in the Asperger story, partly because they play "normal university students" in this story. There is much fun in watching them talking in a fake birthday party scene in the Asperger story. In this story, the young actors play some characters who are not so far from their real lives. That may be one of the reasons why their performances can enliven the scene very much in this story. 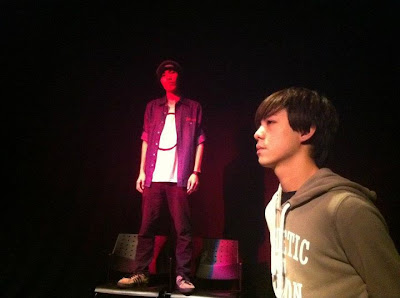